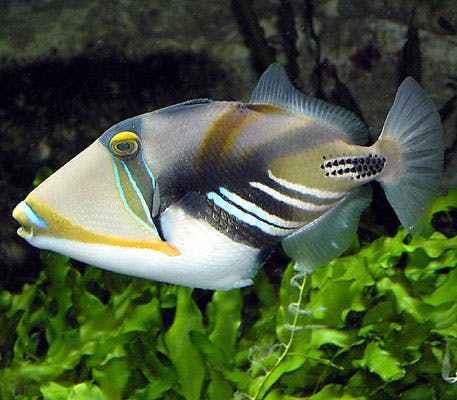 Hanauma Bay is both a Nature Preserve and a Marine Life Conservation District with over 400 species of fish. One of the most common and easiest to identify is the Reef Trigger Fish. The Reef Trigger fish is known as Humu humu nuku nuku apua’a in Hawaiian which translates as “triggerfish with a snout like a pig”. It is often called Humu-Humu for short. It is one of the most colorful fish and is the national fish of Hawaii. They range in size from 14 to 16 inches, which make them some of the largest fish in Hanauma Bay. While snorkeling in Hanauma Bay, you may see many varieties of triggerfish. Your can distinguish them from other fish by their unusual body shape.

See if you can find a Humu-Humu when you visit Hanauma Bay with Snorkelfest.